Zap is one of the Blues and a member of an elite team of minions, in Overlord: Minions.

Zap is currently a member of the Special Forces Team along with Blaze, Giblet and Stench. He helped to avert the Kindred Revival crisis with his fellow team members.

He has also been seen creating blue balls of magical energy and generating Magical Electricity between his hands, though he has never actually demonstrated these powers during the Kindred Revival crisis. 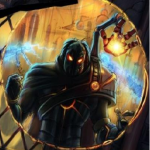