Wraiths are the inhabitants of the Abysses. They are the reanimated spirits of fallen evil beings and come in many different forms. They were summoned by the Forgotten God to defend the abysses and be his army of chaos. After the Third Overlord defeated the Forgotten God, the wraiths pledged their allegiance to him.

These make up the bulk of the abyss armies and are the first wraiths you will encounter. They are just like the other first class of any other enemy and are easily dispatched. In the first abyss they come in small numbers until later when they start coming on as an army. In the later abysses they are accompanied by Undead Musketeers and Undead Commanders. They are summoned by an Undead Reaper. Some Undead Swordmen will carry golf clubs instead of swords, but this is purely cosmetic, and no extra damage is taken

These wraiths work just like the dwarven warriors and usually lead small groups of Undead Swordmen. They can easily kill a single minion but are not very effective against a large group. They are rarely encountered in the first abysses, but in the later ones they seem to flood in.

These wraiths wield muskets that shoot light orbs that can easily kill your Reds or Blues. They are easily overwhelmed and when they are damaged enough they turn into regular Undead Swordmen. While they easily kill the weaker minions they are not a large threat unless encountered in numbers or if they have the high ground and are hard to get at. In some cases it is easier to just burn them to death using the Overlord's fire spells.

These are the most annoying enemies in the game. They charge straight through your minion horde and kill anything they hit. While they are easy to avoid they are usually encounter in tight spaces where you have no room to move your minions. When you see they raise their arms and bring them together that is your cue to call all minions back and get them out of the way. They will change their direction a little bit, but not enough to chase your minions across the room. It is suggested to kill them as quickly as possible using many minions and the Legion of Terror/Honour spell.

The Undead Reapers are cynical and enjoy making people suffer. They can summon wraiths and are usually hard to get to but relatively easy to take down. A suggested method is to use the Legion of Terror/Honour spell and kill them quickly so they have no chance to summon too much reinforcements. They can be seen torturing the other races in the abysses and enjoying themselves no matter how many times they do it. 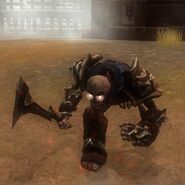 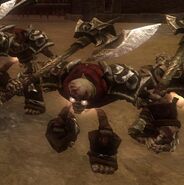 The Wraiths are worshipping their new god.

Wraith Commander.
Add a photo to this gallery
Retrieved from "https://overlord.fandom.com/wiki/Wraith?oldid=19363"
Community content is available under CC-BY-SA unless otherwise noted.