World Objects are static objects that have a function in the World. Unless stated otherwise you will find these in Overlord, Overlord: Raising Hell, and Overlord II.

Gates are ancient arcane links between the Dark Tower and the domains. There are three different kinds.

Tower Gates have a henge behind their portal. They also have one of each Minion Gate next to them. You can tell the difference between them and Waypoint Gates when it glows red, instead of Glowing white circles above it.

Waypoint Gates are lesser Tower Gates, possessing no henge and no inherant Minion Gates, as very few have minion gates of any kind close to them. They do allow the Overlord to warp around that section of the level very quickly.

Minion Gates are used to call minions from the Spawning Pit. They are colour coded.

There are two types of pits scattered around the World, only in Overlord and Overlord: Raising Hell.

Blood Pits are used to gain Health by sacrificing minions. The less powerful minions will be sacrificed first. 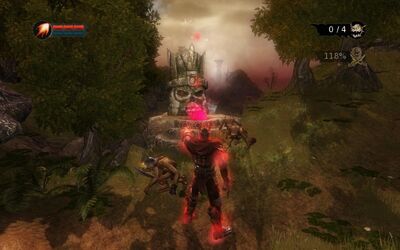 Mana Pits are used to gain Mana by sacrificing Minions. The less powerful Minions will be sacrificed first. The Overlord can send multiple Minions to the Mana Pit at one time and the Mana is transported to him and his visual HUD immediately. Once the Minions have been sacrificed, they do not return to the Minion Gate.

There are special kinds of objects in the World that explode shortly after being picked up by a minion. Do be warned that when set on fire, they explode quite quickly, this is also the case when another bomb explodes near them.

This article is a stub. You can help the Overlord Wiki by expanding it.

There are two sorts of siege weapons, only to be found in Overlord II

Catapults are handy for destroying buildings, guard towers, gates, siege towers, and wiping out a whole Legion of troops from afar. 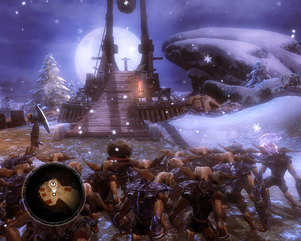 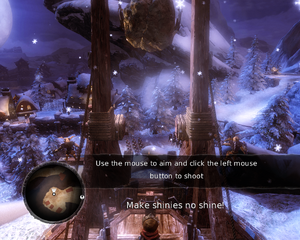 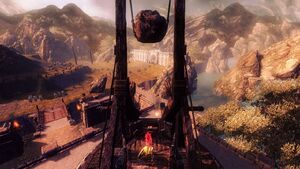 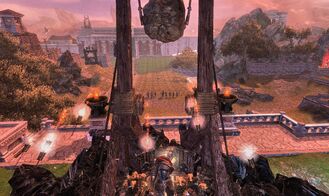 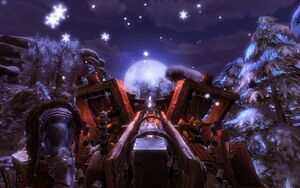 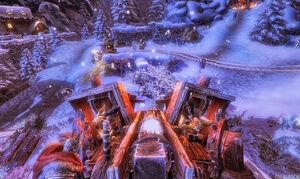 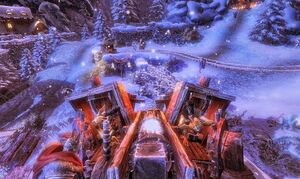 Looting various objects like chests, wooden boxes, barrels, all sorts of vases, yields gold, but to really cash in, collect sacks of gold, or mine carts filled with gold.

Travelling the world of Overlord and Overlord: Raising Hell you will encounter sacks of gold, worth 500 gold or even 1000 gold, that significantly improve your financial situation. So look out for them:

Mine Carts with Gold[]

A visit to the Glittering Mine in the Golden Hills of Overlord, will let you 'liberate' quite substantial amounts of gold. You need to find four carts filled with gold, worth 3000 gold each.

There are also other kinds of objects for minions to pick up and/or use.

The Anti-magic Shield surrounds the Imperial Palace, and a large portion of the Empire City in Overlord II.

To get into Empire City the Overlord needs to use a Sedan Chair, to be found in the Empire Heartland in Overlord II.

Looting reveals flasks of Health and Mana that up the appropriate stats of the Overlord.

Minions can grab Boombo eggs to distract them, especially useful if the birds are menacing Blues, in Overlord.

The minions, when swept, will pick up and drink alcohol. Since they do not take well to it, some animated hilarity will ensue.

In Overlord the minions will occasionally also pick up meat on the tables of the Halfling Homes in Mellow Hills, and "messily" devour it.

Both in Overlord and Overlord II you will need to find spokes for turn-wheels, letting you open gates.

To make Rose your Mistress in Overlord collect her large luggage "mount" in Castle Spree.