Foreman Widget is the head of the dwarf clan who occupy the central mining area of Golden Hills and final boss in Overlord: Dark Legend. Widget is a mechanical expert and is responsible for constructing all the mining mechanisms that the dwarves use in their excavation of gold and metals.

Widget has a very close reationship with Lady Gerda, the First Overlord's older sister, and together they are plotting ways to take over Greenvale.

The Overlord killed him to initiate the war between the elves and the dwarves. Upon his death, Gerda mistakes the disguised minions as elves and declares war on the elves. 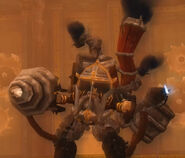 Widget, in his machine suit.

Widget, in his machine suit.

Concept art of Widget in his machine.

Widget in his mechanics.