"Soppy, overrated pit ponies... Elves I despise, but not as much as bloody unicorns!" - Gnarl

Unicorns are horse-like creatures with a horn growing from their foreheads.

They once bestowed healing power, but perhaps due to the corruption of the elf hero Oberon Greenhaze and Evernight Forest they became bloodthirsty in Overlord.

In Overlord II the unicorns have apparently recovered from their corruption and have been captured by the Glorious Empire for use in the arena. A few unicorns can also be found in The Last Sanctuary.They also drop Fairy Gems in Overlord II.

In Overlord: Fellowship of Evil, a male Unicorn named Sparkle appears as the antagonist.

In Overlord: Dark Legend cutscenes of end, the two siblings of the Overlord, Grenville and Gerda, use Unicorns to lead their armies into battle: Grenville rides a normal white unicorn, and Gerda travels in a chariot driven by a black unicorn. Aside from these scenes, the Unicorns do not appear in the game, but we can see that the horse ridden by the father of the Overlord is modeled on a simple unicorn whose horn was removed. 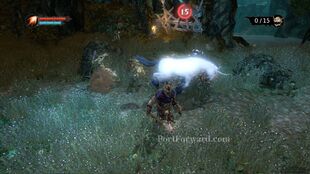 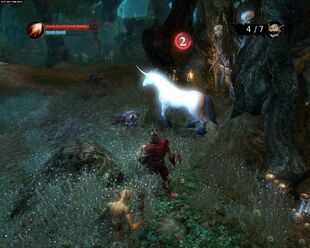 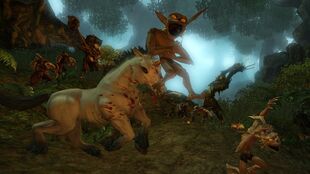 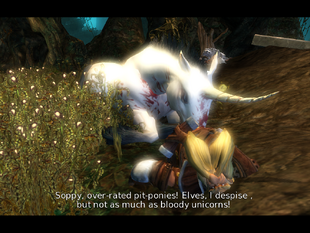 A Bloody Unicorn,eating a dead Dwarf. 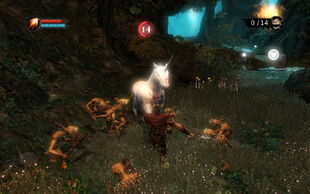