The Overlord is an dark and powerful being who rules over an area of the world, has the loyalty of Gnarl, controls the Minions, and commands powerful Magic.

The Second Overlord (note: he is in the Wizard's body, thus this is not his true appearance)

The Third Overlord (in his Arcanium Armor) 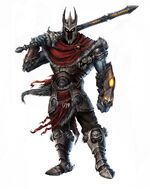 The Netherghuls: Inferna, Hakon, Malady and Cryos (the currently known candidates to the Overlord title)

Retrieved from "https://overlord.fandom.com/wiki/The_Overlord?oldid=17372"
Community content is available under CC-BY-SA unless otherwise noted.