The Dark Tower was a massive tower located between the mountain range that could possibly divide the Ruborian Desert, Golden Hills, and Mellow Hills. It was home to Third Overlord, the Minions, and his mistress during the duration of Overlord and Overlord: Raising Hell.

The Dark Tower was built by the Minions for the Second Overlord to serve as the center for his own dark kingdom. [1] It was speculated for years that The Dark Tower was but a renovated Castle Gromgard, but after the release of the official timeline, this is found to be not the case.

Originally it would have had the fourth Overlord enter the ruined dark tower to restore the tower heart to its former glory, but this quest-line was scrapped. This is evidenced by the concept image found in the wasteland loading screen. It features a torn and dismantled throne room laying in shambles as the tower heart explodes with magical energy, this concept image of the throne room also resembles the throne room prior to it's rebuild after recruiting mistress rose. Judging by the split and crackling of the flooring on the bottom and right and top of the concept it's likely that the throne room has broken into two's to which they are still undiscovered (likely absorbed by the ooze).

The Throne Room is the center of the Overlord's Dark Empire. It branches out into four main rooms that contain smaller rooms. It also contains the Dark Tower Objects that have been collected along with slaves (if they have been taken) and it is the area that holds a portal to the other realms. The Overlord's mistress is near the throne, and Gnarl is near the portal. It is possible from here to see the tower site, which appears to be a lava-like environment.

This is the nerve-center of the Overlord's operations. Here he sleeps, plans, customizes the Dark Tower, and where he stores his gold. The current mistress also resides on this level.

The treasury contains all your riches. The more treasure you collect the more gold will fill up the room.

You can upgrade your Tower from here. It provides different decorations depending on the mistress you pick. Rose turns the tower into a light and shining place, while Velvet turns it into a dark and foreboding place, using much red to accentuate.

These upgrades seem to become available once you free the first mistress (Rose), and some more after you choose the second mistress (or keep the first one). Alas, a normal level of looting will quickly let you buy all Tower upgrades, quickly ending your shopping / remodeling spree.

There is a bland room containing absolutely nothing at the start of the game. Later on, it can be upgraded according to the choice of your mistress:

The Forge is where your weapons and armor (and unique items using moulds in Overlord: Raising Hell) are made and further upgraded.

The Forge can accommodate up to three smelters for the ores: Steel, Durium, and Arcanium. You will find these smelters throughout the game, and unlock new "recipes" letting you forge powerful weapons and armor.

The Armory is where Minion forge master Giblet stores all your equipment. Here you can select what you want to use/wear and also look up the stats on weapons and armor.

Here you can battle a number of creatures, provided you have killed at least one type of that enemy. If you have fought all four types of beetles (red, green, blue, brown) then the dungeon arena can be used to great effect to "harvest" lifeforce for your minions.

Tip: Wearing the Harvesting Helmet (only in Overlord: Raising Hell) you will be able to collect 150 Lifeforce points per beetle batch.

This is where collected Lifeforce concentrates to create new Minions. It is where their Hives are located, and where they live when not looting or killing. The Tower Heart is located here, in the center of the room. The beer kettle you took from the Dwarves is stored here, as well as the iron maiden from the Succubus Queen. The crypt where the Third Overlord awakens is here, and this area also stages the final boss battle.

This appears to be the only area of the dark tower that was saved by the explosion of the Tower Heart, Observed by the world map showing the lower level of the Dark Tower intact, as well as the foundations.

In this area is a cave system that leads to an underground lava chasm, where an arena is found. This is where the Second Overlord makes his last stand and dies.

It also appears that here was where the very first Minions lived, as seen by ancient stones depicting overlords and minions in a young world, meaning that this is a place where the overlord possibly originated.  These minions are apparently responsible for the  first build of the Dark Tower and other ancient stone forts that are been built in other tower lands,found now in a ruin state.

You can also access a one time room at the beginning of the game, just after you show Gnarl that you can summon Minions. You will go upstairs to the exterior of the dark tower where you will fight the jester. This location is showed at the ending of Overlord and Overlord: Raising Hell.

Various objects can be brought back to the Tower to either add to the aesthetic of the tower, or add to power of the Overlord. 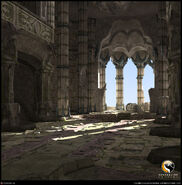 Concept Artwork of the Dark Tower.

Concept Artwork of the Dark Tower and Concept Art of it's rooms.

3d Model of the pillars.

Spell Head Relic 3d Model and a concept drawing of it.

Concept Art of the Crane and 3d Model of it.

Concept Art and 3d Models of the Dark Tower Objects.