"I bet if the Black Baron were here, he'd sort out all our woes! We'd be enslaved, yes, but trouble free!!" — random villager from Meadowsweet Town.

The Black Baron was the First Overlord's uncle. Prior to Duke, the Baron Gromgard ruled over much of Greenvale. He can be considered the predecessor of the First Overlord. There is some speculation that he is the very "first" Overlord.

However, since his demise, the family had locked away anything connected to him in an attempt to forget the family shame, while those who remember the Black Baron speak of him in hushed tones. At least he knew that in order to be worshiped a ruler needs to make sure his people do not starve and the land is free from beasts. Otherwise, there are no worshipers.

Due to the comments of the villagers of Meadowsweet, the Baron must have enslaved the whole village, yet was such a great leader that the villagers' only problem was their enslavement. 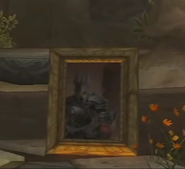 Portrait of the Black Baron 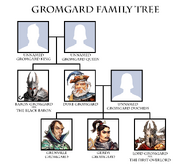 Gromgard Family Tree
Add a photo to this gallery

Retrieved from "https://overlord.fandom.com/wiki/The_Black_Baron?oldid=19466"
Community content is available under CC-BY-SA unless otherwise noted.