The Armour of Fire 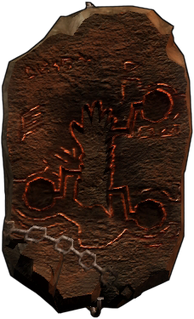 This will cause your foes to burst into flames when they try to harm you.

After you took care of the 'playful' Wraith in his recluse, exit the 'indoor' area, keep left up small bump with a closed rock 'gate'. Destroy the skull altar to the left, then use one of the fire spells on a spiky bomb between the rock. The chain reaction will blow up the rock gate, enter to get first of two moulds in the Golden Abyss.