Succubus Zombies are former residents of Heaven's Peak, twisted into walking cadavers by the Succubus Queen and her plague.

Heaven's Peak is infested with a few different varieties of zombie, each distinct from the others, but all motivated by finding new victims to either infect or eat.

These are the most common zombie you'll find shambling about, roving the streets in massive, minion-munching mobs. Zombies are weak and easily killed individually, but in great enough numbers they'll wear down your horde in a head-on fight.

It may be wise to practice advanced Overlording against larger groups of zombies, such as placing a Guard Marker for your Blues near the fighting to keep your meatshields up and running.

These are the zombie lieutenants, armed with massive blades and powerful magic blasts. They are always in pairs, and appear high up and above the fighting where they can rain down magic on your horde. Sweep your Browns to quickly take care of them.

There are only two venomous zombies in the whole of Heaven's Peak, behind a noxious cloud. They are immune to poison (but not Green attacks), and can poison your minions with their attacks. They are as durable as normal zombies.

These are the smarter zombies that control and summon regular zombies. Gnarl comments on how it looks like they have been "munching on a few military brains." Before you can get the Durium smelter, you must defeat three of these commanders. They drop red Lifeforce and they are just as frail as regular zombies. The only things that make them stand out are that they can summon other zombies, and they are immune to Red's fire attack. They can be quickly defeated by Browns.

Zombie corpses litter the streets of Heaven's Peak, it's sewers, and the refugee camp outside of the city. There are many of these re-killed undead piled up to either be burned or buried or thrown off the walls of the city, giving a sense of just how terrible and massive this plague is.

Natural Zombies are Zombies that were created not via Succubus Plague but via something else. Walking corpses seen in Heaven's Peak Graveyard were seemingly resurrected by the Health Totem which is found on a hill, heavily protected.

In "Overlord: Fellowship Of Evil" Zombies in "Ravenvale" were probably resurrected by Netherheart Shards or by something else. 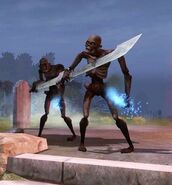 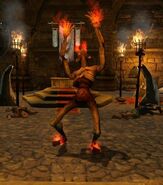 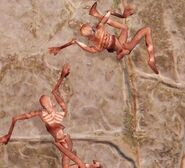 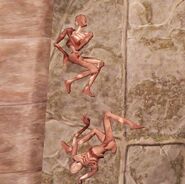 One of the old screenshots of the game, spotting an old model of the Succubus Zombie which can hardly be seen.