Overlord: Fellowship of Evil
Sparkle is the unicorn leader of the Shining Justice. He’s male (although may have a bit of a Mean Girl’s streak about him when he gets angry), speaks through telepathy, and has quite an annoying somewhat nasal voice. Sparkle is obsessive about making the world good and nice, to the point of being dictatorial about it. He was responsible for the death of the Fourth Overlord as well as the destruction of his empire.

He appears to be more intelligent and magically gifted than other Unicorns, being capable of erecting golden shields, creating illusions, teleporting and shooting beams of rainbow-coloured energy from his forehead.

Sparkle makes an appearance in Overlord: Fellowship of Evil. He leads the Shining Justice as the head of the "Trio". He is the source of The Golden, which cutified all that is ugly and evil, like the Minions and other evil creatures. He produces the Golden with its dung and its supply stew made from cutified slugs. 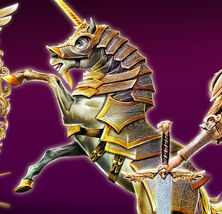 Sparkle in his armor 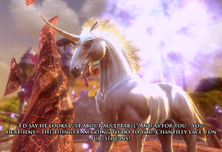 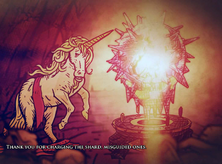 Sparkle, after having removed his Gnarl costume, and about to steal the Netherheart

Sparkle meet the Nether Elves in Hollowmurk to take delivery of the Beholder which he bought in exchange for humans.
Community content is available under CC-BY-SA unless otherwise noted.
Advertisement