"Those are Sentinels, master. It seems as though they can detect magical creatures." — Gnarl warns the Overlord of the Sentinels in the Everlight Facility.

Sentinels are hooded humans, who work for the Glorious Empire and use special staves and wands to detect magic. In spite of the Glorious Empire's magic prohibition, they are a corps of magic users in all but name, being trained by a sorcerer, Rose in the art of magic, indeed, they wield arcane powers and are privy to secrets beyond the ken of normal folk. Having been trained by their mistress for many long years, arcane power courses through the Sentinels' veins and lurks behind their hooded eyes.

Their forbidden arts are used to perform various jobs, while masking the art's true nature by simply calling it "Anti-Magic" and otherwise claiming it is some sort of esoteric practice that completely differs from traditional magic. Sentinels use their so-called "anti-magic" to power the Anti-Magic Shield, locate magical creatures, manipulate gravity and teleport. As well as using spell-craft and enchantments, (dark crystals) to create Gargantuan soldiers, with authorities publicly attributing their prowess to a natural breeding program. They are also implied to be the creators of the Empire's "anti" magic devices/machineries including the vacuum machine of their enforcers, the elite Eradicator Agents. Publicly they are only known as the "anti magical agency" of the Glorious Empire.

They are often found atop guard towers or other high points, and they never come in direct "contact" with the player., except in one cutscene where several Sentinels teleported in and surround the Overlord, activating the anti magic field and successfully captured and sent him to the Arena to fight.

They use their staves to detect if a creature is magical or not and wield wands to locate magical creatures. If it is found to be the case, they manipulate the gravity surrounding it, causing the creature damage and then it is sucked up into the machine of Eradicator Agents or killed by any nearby Empire troops.

Judging from the performance of the Empire General, it seems that the Sentinels' magical experiments have taken another step forward because the Empire General has the body of a gargantuan, but unlike the others he still has his full intelligence and eyesight, and displays the ability to generate a small magical barrier.

In the end of Overlord II, they are seen with Rose, their founder and leader.

In- game, these foes are easy to defeat, they have no defense against being knocked down from their tower. 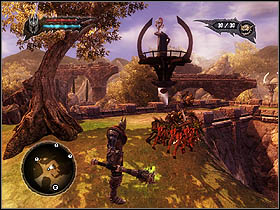 A Sentinel on a tower in Empire Heartland. 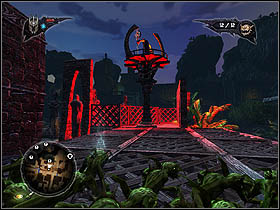 A Sentinel atop a tower in Everlight Facility. 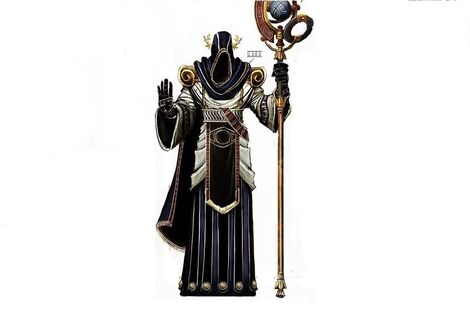 Concept Art of a Sentinel. 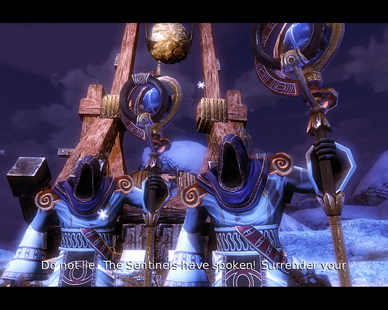 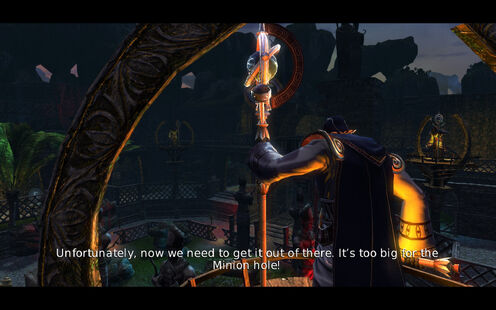