"I say, where's all the laughter, the dancing? They tell me you took it! My pipes must play once more, they must play! Come now! Your Minions against my music!" — The Satyr

The Satyr is a demon called upon by Elven Priestesses. He is encountered on Battle Rock and plays panpipes to summon various magical creatures and enchant minions, a being half-man, half-goat.

The first round of the satyr is fairly easy, as he only summons fairies and flytraps, and you only have to take a quarter of his health off.

In the second round, it is pretty much the same, except you must bring him to half health.

In the third round, the satyr will summon unicorns and fire gnomes as well as fairies and flytraps, but if you keep close to him when he plays music, he will jump to another platform. Before he starts playing again, try and kill some of the creatures he has summoned and kill him off by sending minions.

It appears that originally Satyr,along with the arena,was originally supposed to appear in original game,based on the presence of the character files still in the game folder. 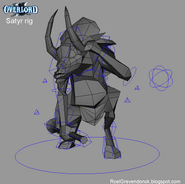