Overlord II
Overlad's Yeti is the Yeti that Overlad (the to be Fourth Overlord) rescued and befriended. The Yeti is later encountered and fought as the first boss in Overlord II.

After the Nordberg Villagers tossed Overlad into the hands of the Glorious Empire Troops standing outside the palisades, he fights his way past them. But in order to proceed he needs some muscle, so he frees and befriends a caged Yeti, who continues to help the Overlad escape. In the end he is frozen along with the Overlad by stepping on too thin ice, sinking like a rock.

In the tutorial portion after the Overlord prelude, the newly appointed Overlord tests his strength by freeing his "Old Friend" and proceeding to bash him. After the Yeti fully thaws, he jumps to a nearby platform, warranting the Overlord's need to send his minions to get him. He escapes to the Hunting Grounds, and the Overlord pursues. Later on, as the Overlord is brutally clubbing some baby seals, the Yeti attacks, due to him being fond of the seals. The Overlord clobbers him and the seals, and pursues him to the docks. The Overlord then proceeds to fight him at the docks, but just as he is in position to finish him off, the Yeti escapes to the safety of the Soldiers of the Sanctuary elves.

Later on, the Yeti appears to have been caught by the Empire and is set loose against the Overlord in the arena. After destroying the Imperial Lodge in the arena, a seal falls down, and the Yeti jumps to save it. The Overlord has to make the choice whether to kill or subdue his "Old Friend," if he is to receive the blue minion hive. If he chooses to kill him, the Yeti becomes a rug in his private quarters. But if he subdues it, it is caged up and placed next to the minion Graveyard. 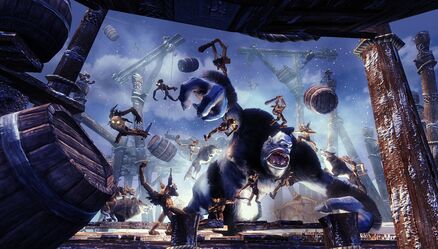 The minions fighting and brawling the poor Yeti. 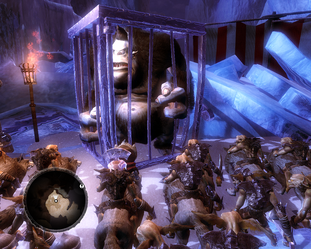 The poor Yeti, locked in a cage in the Empire Camp, in Nordberg. 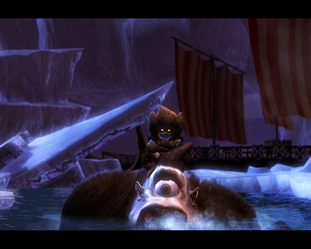 Yeti is sinking down with the Overlad. 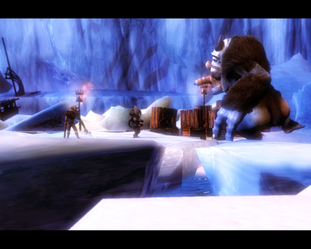 The Overlad befriends a Yeti. 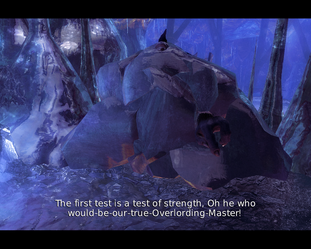 Yeti is frozen in the Ice Cavern, deep in the Netherworld. 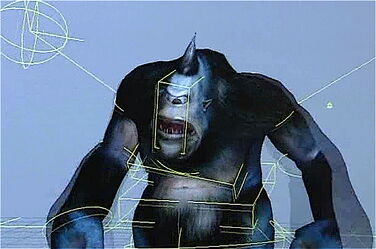 Rendering of the Yeti. 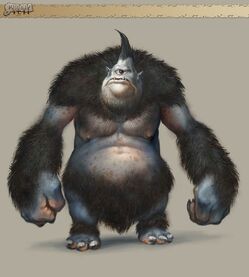