Edit
watch 01:36
We're Getting Mutants in the MCU - The Loop
Do you like this video?
Play Sound

"Once I deserted my people, my forest, and I have been punished. I will not desert them again!" — Oberon Greenhaze before battle.

Oberon Greenhaze was once a hero to the elves who travelled the land slaying evil as a member of The Seven Heroes, yet one day he would return and lose his taste for battle - even when dwarven invaders came to the Evernight Forest he did nothing and fell into a mystical slumber. Over time a great tree grew over Oberon and gave birth to the elf's darkest dreams, corrupting Evernight Forest and transforming it into a nightmare. Although far from heroic, the Third Overlord would prove to be the one who would put an end to this by killing Oberon.

Oberon was one of the seven heroes who rose up against the reign of the Second Overlord in order to purge the world from evil. He fought him in the Dark Tower beside his companions and the Eighth Hero. After the fall of the old Overlord, he was convinced by The Wizard (who was under the possession of the second Overlord) that he needed his rest and encouraged him to become lazy and slothful, causing him to fall into a deep slumber.

When the dwarves invaded Evernight Forest, he would not awaken and so the forest merged Oberon with a tree. This tree caused his nightmares to come to life, his inner demons that plague his dark nightmares became a reality to turn the tide of the war with the dwarves, but at a terrible price. When the dwarves were defeated and driven out of Evernight Forest, the nightmares turned upon the elves killing them one by one; but the surviving elves escaped or were enslaved by the dwarves. His dreams haunted the forest surrounding him. The tree seals the entrance to the Golden Hills to prevent another dwarven invasion.

He is encountered sleeping in a tree in front of the entrance to Golden Hills. After destroying all root nodes of his tree, he is fought as the boss in this area. He awakes fights by summoning his nightmares and corrupted creatures from behind his tree to attack the player and collapses with his tree when defeated. Oberon seems to be the only hero who is regretful of his actions as he asks the Overlord to 'release him from his torment' during the finishing move.

"We must help him! He fought beside us. There may still be a chance." — Oberon about the eighth hero after his fall.

Before the final battle the Second Overlord in the body of The Wizard allows the Third Overlord to hear the final words spoken there by the heroes. It should be mentioned that Oberon is the only hero to suggest that they retrieve the eighth hero's body and that they should do so because he fought beside them. The other heroes scoff at the idea, and in any case leave the Tower.

Forever locked in a tree, Oberon is punished in the Evernight Abyss, forced to watch a play staging the battle between the elves and dwarves, called the Terror of Evernight. The play repeats the first two acts again and again, since the "Terror" is missing / broken. Luckily the Overlord comes in and finds the "Terror", so that the play can proceed. As it turns out the "Terror" is actually Goldo's steamroller Rollie and the Overlord runs over the elven actors with it, to then burn Oberon to ash, revealing the abyss stone trapped behind the hero. 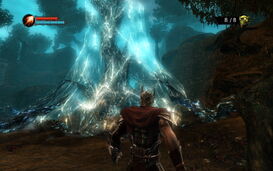 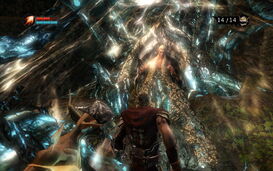 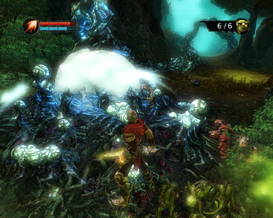 One of Oberon's root nodes. 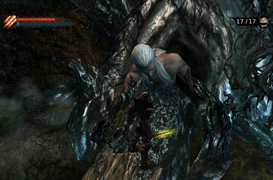 a size comparison between Oberon and the Third Overlord.
Русский
Community content is available under CC-BY-SA unless otherwise noted.
Advertisement