Nordbergians are an ethnic group of humans native to the cold nordic region of Nordberg. They are renown hunters and seal farmers, but they are definitely not good warriors.

Nordbergians tend to have pale, weather-beaten skin and red or blond hair, though darker hair colours such as black and brown are not rare amongst them. They also tend to cultivate large, wild beards, which are very useful for protecting theirs faces from the icy winds of their cold native land.

Most Nordbergians are located in the icy town of Nordberg, the first city closest to the tower lands free from the effects of the Magical Plague. The citizens are extremely passive and unable to fight back and can be easily enslaved by using the Evil Presence spell. Also, they drop equipment, which the minions can pick up later, such as gloves, pitchforks, shovels and hats. They sometimes are seen hiding in houses.

If enslaved they will work costantly to forge equipment for the minions, dig gold or grow seals to harvest lifeforce

Note: There are two peasants per house. 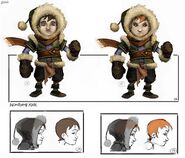 Concept Art of the Nordberg Kids

Concept Artwork of a Nordberg Girl

Kelda
Add a photo to this gallery
Retrieved from "https://overlord.fandom.com/wiki/Nordbergian?oldid=19396"
Community content is available under CC-BY-SA unless otherwise noted.