In Overlord the Browns can automatically equip many different kinds of items — found while looting. So can the other minions, though the results are less visually spectacular after pick-up.

All Minions can pick up various pieces of equipment which improve their overall strength by a certain percentage. These bonuses will stack up to a maximum of 400%. Besides the visual appearance there is no difference between weapons and armor (both affect offensive and defensive parameters equally).

The Browns are limited to one weapon and helmet, but will drop older ones in exchange for the betters whenever possible. Their body armor, however, can only be upgraded, gaining new elements in addition to existing ones, instead of being swapped altogether. As a consequence Browns will never drop body armor they are already wearing.

The Reds, Greens and Blues use items in a slightly different manner, more similar to how Browns' body armor works. Firstly, any weapon or helmet they pick up will not be visually represented, improving their armor instead. This also means that, unlike Browns, they don't drop equipped items at all. Secondly, there are only ten distinct armor configurations for these Minions with predefined strength bonuses of 100%, 133%, 166%, 200%, 233%, 266%, 300%, 333%, 366% and 400%. Thirdly, they are not limited to a single weapon or helmet, but will refuse to pick up worse items than those they are already carrying. For example a Red Minion can collect three Golden Scimitars to level from 100% to 400%. Finally, the magnitude of the bonus provided by items is different for Reds, Greens and Blues than it is for Browns. As a rule of thumb weapon and helmet bonus is rounded to a nearest multiple of 33%, while each body armor upgrade increases overall strength by a flat 33%.

There are several occasions in the game, where starting equipment of the Minions can be upgraded. The effects differ depending of player's choices and Minion tribe.

Unlike weapons and helmets each of which has its own unique appearance, armor uses more incremental approach. Visually every level of armor is a sum of all its predecessors and some new elements (described in the table below).

Several unique, non-respawning, boss-type enemies drop their items upon defeat. While Minions can pick this loot up, they have only one chance to do so. If the Minion carrying it is killed, the item is lost forever.

In Overlord II, there are also special helmets that your minions will pick up and earn the title of champion, these however require you to complete certain requirements, and if you don't pick them the first time, you will not be given a second chance, only the Browns can wear these helmets. 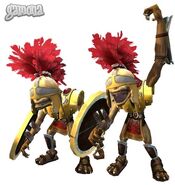 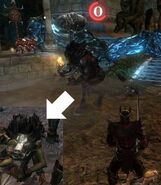 A Minion with the Halfling Cook hat and cleaver.
Community content is available under CC-BY-SA unless otherwise noted.
Advertisement