“
Stupidity truly is a bliss

Minions are a race of small Gremlin (Imp or Goblin)-like creatures. They are The Overlord's loyal servants that are born from Lifeforce (which comes from any killed living thing). They are used by the Overlord to follow his every command; from fighting to ransacking homes and smashing containers (and anything else that looks breakable for that matter). There are four types of minions.

They aren't very smart but they are extremely loyal to the Overlord to the point that they would die for him without a second thought (and more than once if resurrected), since Gnarl mentions that they have tiny brains and they are very 'honest', they seem to have a connection to the Overlord's gauntlet, which he uses to command them. They like to jump on sheep while hitting them on the head. Their true origin is unknown, although it is rumored that they originally came from the Netherworld.

The Minion race is split up into four types called Tribes.

"Browns are melee fighters. Their policy is bash first, jump up and down on the carcass later."

"Browns are toughest of all the Minions. They're never ones to shy away from a
fight. In fact it's quite difficult to get them to stop! Such is their dedication to the fight that Browns can also use many different objects as weapons." — Gnarl

Browns are the basic minions that you start out with and are subsequently the most versatile of all the minions. Brown minions are born fighters and will gather Minion Equipment that will help them in battle (such as swords and armour) as well as things that have no relevance in battle (like pumpkins to wear as hats or Melvin Underbelly's crown.) They can sustain the most damage and can hold their own in a fight. They can not go through water, fire, or toxic gas however, so whilst it is important to always have some with you, it is generally a good idea to have some of the other minion tribes with you as well. Also they, unlike the other minion tribes, do not have tails.

In Overlord 1 they were able to, just like the Greens, jump on enemies if they attack them from behind. This renders them immune to attacks from that enemy, until they were shaken off or called back. However, in Overlord II they seem to have lost this ability.

Browns can be upgraded by Rose for free (if you choose her instead of Velvet). As of Overlord II, Browns can ride wolves, also known as "Good Wolfy", as mounts.

As of Overlord 2, they wear a piece of fur around the shoulders and exchanged their pants with fur loincloths held by a studded belt. Possibly because they spent a long time searching for the Fourth Overlord making them wear fur to stay warm.

Reds — The Fire Extinguishers and Archers

"Reds aren't particularly hardy, so you mustn't let enemies get too close to them, Sire. But use them in a horde, and that's a different story — a story full of flames and burning and screaming! Ahhh, it's good to have them back, maybe I can get a hot meal now!" — Gnarl

Reds are weaker and less equip-able (they still do take equipment for themselves though) than their brown cousins. They have a ranged attack that can be very effective if used correctly. While this minion clan does not boast a large health pool, they possess the invaluable ability to be immune to fire and absorb flames. If paired with stronger minions, like browns, the reds will provide fire support to their fellow minions.They are best used on humans, halflings, ruborian raiders and any other creature that fears fire. If enough reds target an enemy, the enemy can catch on fire and take periodic fire damage that lasts until the flames wear out or the target dies .

Note: The Reds grow longer horns and tails when they collect equipment and will gain spikes on their tails.

Reds can be upgraded by Velvet for 5000 gold. In Overlord II, Reds acquire salamanders as mounts. Described as walking flame throwers, they are also able to roll into a ball when being swept. They call the salamanders "Good Flamey."

Greens — The Assassins and Poison Exinguisher

"What they lack in hygiene, they make up for in sneakiness."  - Gnarl

"Greens can do a great deal of damage if you attach them to an enemy's back. They aren't terribly hygienic I'm afraid. But they are good at sneaking up on things. Use them to guard an area, and they're practically invisible. As long as the enemies don't notice the smell!" —
Gnarl

Greens are slightly stronger than reds and are valued for their stealthiness, being invisible if still, their ability to pass through poison gas and absorb poison clouds, and their immunity to poison attacks,but they have poor hygiene as they have a foul smell of rotting flesh. They turn invisible to your enemies if posted at a guard marker, causing enemies to walk by without noticing them, until given the order to attack or when the enemy comes too close, which then the Greens attack automatically by jumping onto their backs if possible. Greens can do more damage than browns but only if you can attach them to your opponents back (works best on large enemies) in Ovelord 2 they have lost their automatic backstab attach (unless posted at a guard marker), requiring you to manually target the back of said enemy. They are also very quick as Gnarl commented on the fact the greens got distracted in the Minion Exodus, "We blinked and they were gone."

Greens can be upgraded by Velvet for 5000 gold. In Overlord II, Greens acquire spiders ( they call them "Good Spidey") as mounts that are able to climb webbed walls and attach to the enemy's back, as normal greens can, but doing extra damage.

"The Blue Minions' minds appear to be on a different plane of existence half the time. When they do decide to join us on this one, their healing and magical-damage skills can be most useful. They can resurrect fallen Minions during battle, but Blues are quite fragile, so position them carefully." — Gnarl

These are the weakest of the Overlord's minions. However, they are the only Tribe that is able to swim where all other minions would drown ("in rather amusing ways", according to Gnarl). They can also revive dead minions (as long as they are in one piece). These are the only minions that will not attack an enemy without your order, but they also have the advantage of magic attacks allowing them to attack ethereal enemies, like wisps and ghosts. They can "auto-resurrect" if placed on a guard marker near the place of their fellow minion's death. However they are unable to truly attack enemies with a large health pool such as a empire soliders and gargantuan

By gathering equipment, blues grow additional fins on their heads.

Blues can be upgraded by Rose for 5000 gold. Blues do not gain access to mounts in Overlord II, but they gain the ability to 'blink', which allows them to be swept past and even through enemies unharmed. They are also the only minions that can get through the magical ooze that is found throughout the Wasteland, or that has been produced from The Devourer. Their new ability most likely stems from the fact that they had been effected slightly by the cataclysm as a whole, while lingering around still in the towerlands because "they felt lost without an overlord" and then they were captured by the glorious empire for torture entertainment this could've given them immunity to magic poisoning and overall more magical properties.

Minions are called from Spawning Pits through Minion Gates. the strongest Minions will always be spawned first.

Your horde is the group of minions that are currently with you. Your maximum horde size may be small and meagre when you start off, but it will increase in size with the acquisition of certain objects (or minion-imbued helmets).

Summoning a type of minion requires that minion's respective hive. In Overlord, Overlord II and Overlord: Dark Legend, you start off with only the brown minion hive.

For Overlord, see the Dark Tower Objects, and for Overlord II, see the Netherworld Objects for a list of hives and where to find them.

In Overlord II minions are still used to forge weapons and armour. To sacrifice a minion outside the Nethertower, however, overcharging the Minion Spell is used to gain some Health.

There are several ways to control the behaviour of your minions.

All Minions can pick up and equip a large amount of items (however only Brown's Equipment will correspond to the equipment the pick up. All other minions will receive a unique type of equipment for their respective tribes such as 3 mounted blades, skulls, and ear rings for greens, a leather gauntlet and various pieces of armor for reds, and bone armor with potions for blues), doing so increases their power. A newly born minion starts off at 100% power, unless the Overlord has upgraded them which gives them a higher percentage from spawn till death.

Introduced in Overlord II, is the ability for brown, red and green minions to ride mounts. Only blues do not have a mount:

Minions (except blues) will become mutated if they catch the magical plague by walking through magical ooze in The Wastelands in Overlord II. When mutated, they grow in size and aggression and will attack their former Overlord and fellow minions. The only solution is killing them, after which they will drop a single life force of their own colour. Dead mutants will not appear in the Graveyard for resurrection.

There are a group of mutated minions guarding a spell catalyst in some ruins in the Wastelands, presumably these plagued minions are those who were left behind to guard the Dark Tower and have survived since the Great Cataclysm.

The Minions cutified are the victims of the Golden, turned from evil and demonic creatures into beings that are normally gentle creatures, fluffy and more stupid than normal Minions.

Unlike the previous game magical sludge, no Minion is immune to Golden soon as they are hit, they are irrevocably transformed and only death delivers them from their fate. Unlike other minions, Gnarl was able to retain his lucidity when cutified and may finally become himself. 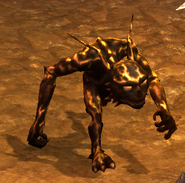 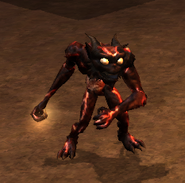 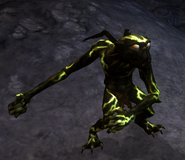 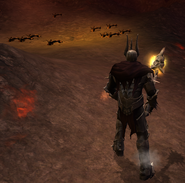 Digging out of soil.

Ambush.
Add a photo to this gallery

They are voiced by Marc Silk and Stephen Critchlow.

Retrieved from "https://overlord.fandom.com/wiki/Minion?oldid=18361"
Community content is available under CC-BY-SA unless otherwise noted.