Melvin Underbelly, formerly Melvin the Small is a grotesquely obese halfling who was part of the group of heroes that defeated the Second Overlord.

He was originally small for a halfling, but after being convinced by the Wizard that, after becoming a hero, he could have all the food he wanted. He started eating large amounts of food, causing him to grow taller than a normal halfling and become morbidly obese (To the point where his flesh must be held together by golden pin-like objects resembling stitches). The player finds Melvin soon after helping the human village of Spree defeat the halflings that have attacked their lands. They ask for your help to defeat the remaining halflings in the area. The player then discovers that there is a party taking place for Melvin. The Overlord's minions sent to destroy the halfling hero quickly became entranced by a magical song (along with Gnarl himself) - allowing Melvin to run (or, rather, waddle) away to his house. However the titular Overlord was less impressed and killed the musician to put a stop to such foolishness before pursuing Melvin. Perhaps unsurprisingly Melvin is found inside his kitchen, where it was revealed his minions were using Red Minions to start his cooking fires (it was also revealed the glutton had enough food to feed over a hundred minions). After freeing the Red Minions the Overlord and his minions face Melvin in battle and his size makes him a formidable opponent. Throughout the battle, Melvin displays an extreme level of gluttony verging on cannibalism, as he constantly tries to kill and devour the minions. When he is defeated, he pops, splattering fat all over the kitchen, but the Overlord is rewarded with a portion of concentrated evil, which in turn brings him closer to his goal of conquest.

He is punished by being fed too much food for him to handle and explode, then to come back for the cycle to repeat again. He is used frequently in the Mellow Hills Abyss by the Overlord to destroy defences and blow up blocked passages. He is ultimately defeated when he rolls at the player, but is dodged and rolls down a hole. Here he must go on a permanent diet of mud and earthworms.

He is battled in Melvin's Kitchen and has two main phases. In the beginning he fights exactly like a troll. To defeat him, make your brown minions go on his back and stab him, when he prepares to jump, call all of them to you, if your minions get hit by that movement, a lot of them will die. Be aware that he will try to hit your minions using his fork, that does moderate damage, so the best is not to send all your minions all at once, just enough to cover his back. Continue doing this until he get to his Second phase. When he gets to half health, he switches tactics to rolling around like a bowling ball, this rolling movement does a lot of damage to your minions, so try to make your minions not stay on his trail. He will move in a straight line when is rolling, making it easy to determinate where he will go. After a few rollings he will stop moving, in this moment send all your minions to strike him until he starts to roll again. Do this until he gets defeated. He will drop a gold crown and a gold fork that both can be picked up by your minions.

Melvin is the king of the halflings and ruler of Mellow Hills. He seems to like singing, implying he may be a bard, though, as Gnarl says, he has a better taste in food than in music. Melvin wears a gold crown and uses a gold fork to attack the player and his minions. He represents the sin of gluttony, so not surprisingly he is extremely gluttonous. His gluttony is to the point that he declared war on Spree to steal their food and appease his appetite. He also isn't very intelligent, so he can't speak in full sentences. It is also said that his blubber can be hypnotizing if looked at for too long, as Gnarl points out.

Melvin is making a run for it.

Melvin's outfit is interestingly ripped from his obese body.

Melvin is making a run for it. 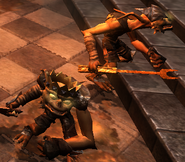