"Look... wait, I don't do pain. The Wizard... he wanted me to pinch the statue. No idea why, he even paid me!" — Gnarl mentions his Iron Maiden, and Jewel becomes talkative.

Jewel is a Ruborian human female who was part of the group of heroes that defeated the Second Overlord.

Representing the sin of envy, Jewel the Thief had everything, but after the Wizard convinced her that what she wanted was what others had, she began to obsessively steal the property of others despite having no actual interest in it once it became hers.

She desires the elven Mother Goddess statue because everybody else wants it. Gnarl sneaks 5 minions into the statue before she can steal it, allowing access to her domain when the minions crawl to a secluded tower gate.

After the Overlord and his minions explore the Ruborian Desert for the first time, seeing a Sandworm eat a Ruborian Fighter and going through some Blaster Bug breeding grounds, she is found setting up an ambush with more Ruborian Fighters. After the Overlord defeats the ambush and chases her across the Ruborian Desert, going through several Ruborian Fighters and their stronger variant Ruborian Bombers, they will end up in a village. She will ignore your minions and cannot be targeted. However, she will continually run away from the larger Overlord without fail. Gnarl boosts the power of the nearby Tower Gate to capture her, but the Overlord must drive her to it. 5 minions on one of 6 small staircases, marked by 2 distinct totems, will block her entering those areas, while the Overlord drives Jewel up to the Tower Gate through the main road. Jewel is then captured, interrogated and thrown in the dungeons , and thus does not appear in Overlord: Raising Hell.

Her ultimate fate is unknown. She was not killed, unlike other Heroes, and did not appear in the Abyss. It is possible she remained a prisoner of the Dark Tower to the disappearance of the Third Overlord and she has been imprisoned when Florian caused the explosion of the Tower Heart, also killing Jewel.

She leads a group of Ruborian thieves and is loved by Kahn. She is particularly taken by anything that others crave for, then steals it.

When you unlock all the Keys in ever night at the temple of the mother goddess before the cutscene you can see her and the 2 ruborian warriors in front of the statue. If you sweep your minions to her she and the warriors will attack your minions. Her attacks kill browns in 1 hit and she looks like she does karate. If you sweep your minions back to you she will follow but when you are in sight she will not attack your minions or you and follow you. During the cutscene Jewel and the warriors will not appear but the audio will play what they are supposed to say. The only appearing characters there will be in the cutscene is Kahn and the overseer. 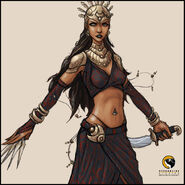 Jewel imprisoned at the Dark Tower.