Inferna has been described as a legendary warrior who met her gruesome end at the hands of rock trolls. Following the death of the Fourth Overlord and the invasion of the Golden, Inferna was raised as a Netherghul to serve as a potential candidate for the Overlord throne.

Her main strengths seems to be her great physical prowess and fire magic.

Inferna comes from the Rubornian red desert lands. Although her people always had an affinity with fire, it was discovered that Inferna had the ability to summon fire from within her body – the living flame. This led to her being feared and eventually ostracised by her own people when she was just a child. Frightened of the powers she held within her, Inferna’s own father took her out into the deep desert and, to her horror, left her alone to die.

But somehow the young Inferna managed to survive the sandstorms, the burning sun and the desert beasts. When she emerged from the wilderness she did not return to her village. Inferna had endured the harshest trials of nature. She didn’t need any help from anyone. Instead she continued to look after herself, hunting and stealing what she wanted; the flames her only companions.

Inferna grew tough and resilient. She taught herself to fight and stalked the land taking down whatever stood in her path, determined to be as hostile and brutal to the world as it had been to her. Eventually she got such a reputation that baskets of food and drink were often left outside village gates just in case the “Red Death” was passing so she might take the goodies and not attempt to singlehandedly destroy their homes.

Inferna eventually met her demise fighting a family of rock giants for the gem seam they protected. Whereupon the Minions that were secretly observing her recovered her shattered remains and brought them back to Gnarl, the Minion Master, who resurrected her as a Netherghūl.

One page about Inferna from the Overlord FoE art book. Notably, its stated here that Inferna's design was intentionally designed after the third Overlord.

The final consepts of Inferna with her in game model. 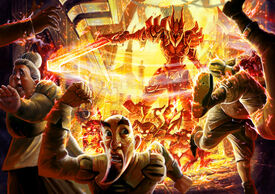 Inferna while is destroying a village. 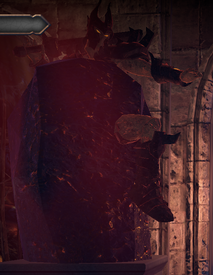 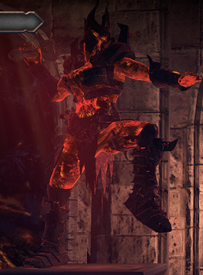 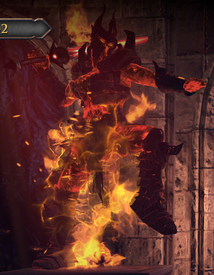