Before his death, Hakon (pronounced "Hawk-on") was the leader of a group of infamous dwarven mercenaries known as The Utter Bastards. The Bastards are extraordinarily tough and ferocious, and also tend to leave utter carnage in their wake. Hakon worked his way up through the group since he was a nipper, largely by being a more devious scheming bastard than his cohorts.

The Bastards have quite a robust approach to leadership which tends to be occupied by whichever of their number manages to survive in the position the longest. By far the greatest threat to any Bastard leader is being killed off by a member of their own crew.

And to those ends Hakon has been quite a successful leader in that he managed to survive for two years in the role, prior to his death. However, he had seen off more than two dozen assassination attempts by his own men. This usually resulted in their deaths or extreme maiming. Since killing one another off is pretty much seen as an extreme sport to the Bastards (especially if they can’t find anyone else to kill) they don’t hold grudges should an assassination attempt be thwarted. Therefore most of the Bastards are extremely scared and often missing eyes, ears and the occasional limb.

Eventually Hakon met his end after the Bastards were hired by the Shining Justice to help them take down Cryos’ and his dark elf family. Some of the Bastards weren’t too happy about working for Paladins, but the pay was good and it gave them an excuse to kill elves. Hakon and Cryos ended up fighting and both killing each other off, thus giving the Minions a two-for-one-opportunity for Netherghūl candidates. 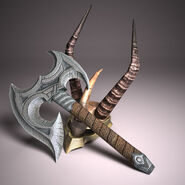 One page about Hakon from the Overlord FoE art book.

Hakon's original design before being made a dwarf.

The final consepts of Hakon with his in game model.

Hakon while is fighting a horde of zombies. 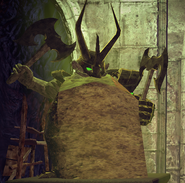 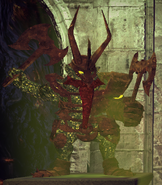 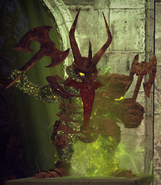