Traveling widely around the world in search of new lands to subjugate, the Fourth Overlord has earned a number of epithets and aliases from those who have suffered the affects of his vile actions. In Nordberg Town he was known during his youth as the Witch-boy, for there he experimented his first nefarious magical powers against the other children of the city (however today only his first mistress, Kelda, dares to call him this way, and only by using it like affectionate nickname). In the Elven Resistance he is the Scourge of Nature, following the destruction of the Nordberg Sanctuary, by his hand, and the agonizing death of all the creatures who lived in there. In the Glorious Empire he is the Demon Lord of Nordberg, following his bloody conquest of the snow-covered city of Nordberg Town at the head of a demonic-looking minion army.

The Witch-boy was an extremely tall, broad, and fearsomely strong man, even larger than his legendary father, the Third Overlord. He was bull-like, with massive shoulders, a thick neck, and a wide chest. His arms were a little short but heavily thewed, thick as the trunk of small trees and capable to wield a two-handed greatsword or battle-axe with just one hand. Both outside and inside the battlefield he wore a thick plate armor that was so heavy that no ordinary man would be able to move, let alone fight effectively while wearing it, making him nigh-invincible in combat. He also wore a three-horned plate helm with only a narrow slit for vision, through which his angry-looking, bright yellow eyes were able to spot the enemy, while keeping his facial features completely hidden.

There is, however, little doubt that by far his most peculiar physical characteristic was his skin: crystal-blue in color and covered in white spiraling symbols. There are various theories that can explain this unnatural skin coloration, but none of them has been confirmed to be canonical. According to one of these theories, his condition could be the result of a mild exposure to the Magical Plague in utero or shortly after birth -- considering the plague victims have similar skin color and markings as he does -- which may even explain his fine attunement with magic. Even his superior muscular strength and abilities of domination could be part of the side effects of the plague.

The Fourth Overlord was a born warrior whose skill with weapons was unmatched. He lived for war, gladiatorial matches and battle, and rose to become one of the youngest and finest military leaders of his time. However, he was also a hard and brutal man who craved violence, death, and absolute mastery over all he deemed his. His savagery in the field and his harsh command techniques were legendary among his servants and enemies alike. In terms of overall evilness, the Fourth Overlord was much more efficient and domineering than his father. While the Third Overlord relied on his own charisma and deeds to earn the loyalty of his subjects, the Fourth Overlord simply used his signature Evil Presence Spell to turn them into his loyal slaves, or merely destroy them and pillage their valuables, depending on the path the player has chosen.

He also took a more "hands on" approach to his conquered lands, keeping minion guards topside at all times whereas the Third Overlord only did so in specific cases. However, he was not outright cruel, and many commoners from the lands he had conquered felt no fear in alerting him to the happenings in his domains, and making foolish requests that he would choose to either fulfill or completely ignore.

His style of waging war greatly contrasted the combat doctrines of most of his predecessors. Again, the most notable contrast was with his father, the Third Overlord. Whereas the Third Overlord preferred battles of attrition and full frontal assaults to overwhelm and capture enemy strongpoints (such as his assault on the Silent Order), the Fourth Overlord was a master of subterfuge and lighting-fast assaults. For example, in the Nordberg Sanctuary, instead of facing its dryad guardians head-on, the Fourth Overlord, possessing the body of a minion, snuck around via a secondary, hidden path and took the dryad by surprise from the rear. When conquering the imperial colony of Everlight, the Overlord quickly swept through the town, scattering and confusing the static legion phalanges with attacks from multiple directions and speedy pushes, defeating the much more numerous and arguably more experienced Empire forces.

He had the natural ability to control magic, though like his father still needed spell stones to activate his full magical potential. He is also, unlike the Third Overlord, "in tune" with arcane energy--to the point where even standing near a netherworld gate regenerates any wounds he suffered and replenishes his internal mana reserve. This is possibly due to the fact that he is the son of the Third Overlord, who possessed magical ability of some description, or it could be the Tower Heart's explosion infused him with some of the original spell stone power (since the Tower Heart managed the spells).

He seemed to be more attached to the Minions then his father, considering them to be close friends, since they were one of the few who didn't fear him and treating him like one of them, in contrast against most of the Nordberg children who despised and feared him. He grew up with the Minions, which is the possible reason why he was willing to sacrifice the newborns in order to bring some of his more experienced (and likely more friendly towards) dead Minions back to life through Mortis, an ancient blue Minion responsible with the life and death of the Minions.

Despite being a man of violence and cruelty, apparently incapable of feeling emotions like love and affection, the Fourth Overlord seemed to be rather fond of female company and not at all indifferent to the "pleasures" derived from it. Unlike his father, who had only one mistress, the Witch-boy chose to have three mistresses in his court: Kelda, Juno and Fay. The three women were not at all frightened or disturbed by his wicked presence and his vile actions and seemed to genuinely enjoy his company and attentions - even if for different reasons - while it was not clear whether he really felt love for them or just wanted three trophy wives to enjoy the "pleasurable company". 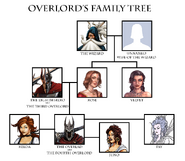 Retrieved from "https://overlord.fandom.com/wiki/Fourth_Overlord?oldid=19302"
Community content is available under CC-BY-SA unless otherwise noted.