After his father, the Third Overlord, was trapped in the Infernal Abyss, his mother left the Dark Tower and abandoned him outside the gates of Nordberg. The empire of the Third Overlord started to fall into chaos without its iron fist leadership, until its complete annilhation due to the Great Cataclysm that destroyed the lands around the Dark Tower, leaving behind the Wasteland.

When he came of age, after thirteen years in the Netherworld with the Minions, he assumed his rightful place as Overlord. Shortly after proving he was Overlord, he conquered Nordberg in revenge of the villagers casting him out to the empire. There he defeated the local governor,Borius and took his first mistress, Kelda.

After finding Solarius and discovering that he is actually Florian Greenheart (a servant of queen Fay and the cause of the Great Cataclysm), Rose informs him that he has gone mad with power and must be stopped before he can destroy all traces of good in him. Solarius then jumped into a great vat where he had been storing all the magical energies his Empire had been gathering from accross the world and transformed into the Devourer. After fighting the newly formed Devourer, the Overlord realizes that in order for there to be evil, there must be good, and the only thing that could destroy a great evil is an even greater evil. The Overlord accepts that he is that greater evil. After killing the Devourer, the Overlord destroys the "Glorious Empire" and takes his rightful place as ruler of all the land as Overlord.

In terms of overall evilness, the Fourth Overlord was much more efficient and domineering than his father. While the Third Overlord relied on his own charisma, deeds, and seemingly miraculous timing to keep his subjects in line, the Fourth Overlord merely chose to use his Evil Essence magic to reduce them into puppets, or kill them off without hesitation.

He also took a more "hands on" approach to his conquered lands, keeping a cadre of minions topside at all times whereas the Third Overlord only did so in specific cases. However, he was not outright cruel, and many commoners from many lands he owned felt no fear in alerting him to the happenings of his domain, and making stupid requests that he would choose to either ignore or fulfill.

He had the natural ability to control magic, though like his father still needed spell stones to activate his full magical potential. He is also, unlike the Third Overlord, "in tune" with arcane energy--to the point where even standing near a netherworld gate regenerates any wounds he suffered and replenishes his internal mana reserve. This is possibly due to the fact that he is the son of the Third Overlord, who possessed magical ability of some description, or it could be the Tower Heart's explosion infused him with some of the original spell stone power (since the Tower Heart managed the spells). He seemed to be more attached to the Minions then his father, considering them to be close friends, since they were his only ones who didn't fear him, treating him like one of them in, contrasting against the Nordberg children who despised and feared him. He grew up with the Minions, which is the possible reason he was willing to sacrifice the newborns in order to bring some of his more experienced (and likely more friendly towards) dead Minions back to life through Mortis, an ancient blue Minion responsible with the life and death of the Minions. 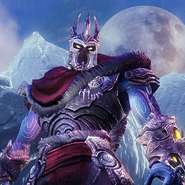 Retrieved from "https://overlord.fandom.com/wiki/Fourth_Overlord?oldid=18011"
Community content is available under CC-BY-SA unless otherwise noted.