"There's the scoundrel! The lady Juno was to be mine. We had an understanding. But you took her and now you shall feel the crushing boot of the Empire upon you!" — Empire General

The Empire General is encountered on Battle Rock after the Overlord has saved Juno. He claims he and Juno were going to have a relationship, and looks like an gargantuan except for the different armour. His face is similar to that of a centurion.

The Empire General - Round 1 Edit

Notice the general is on a tower surrounded by a blockade. Kill both troops and get the ballistas up. One ballista shoots explosives, and you must use this one to take out the barricade, and the other shoots bolts, which are good for killing soldiers surrounding the explosive ballista. Then, go up and attack him a bit, dodge his attacks, knock him over and attack him again, and he will run away, ending the round.

The Empire General - Round 2 Edit

The general is still on the tower, and you must do the repeat the previous battle, except attack him for longer.

The Empire General - Round 3 Edit

In this round, archers will fire at you from towers, so when you get to the ballista, take them out with either ballista, and then get the barricade down with the explosive one. Do not yet leave the ballista, since more Empire troops with crossbows will emerge from one tower. Use the ballista to take them out, and then fight the general. At half-health, he will jump down and summon his troops to attack you. Leave your minions to fend them off, and shoot him with the explosive ballista. While he is down, attack him and then repeat. Be careful to avoid his charging. Eventually you will kill him. 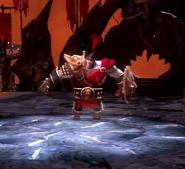 The general in the Battle Rock arena.

The General Grinder.
Add a photo to this gallery

Retrieved from "https://overlord.fandom.com/wiki/Empire_General?oldid=19358"
Community content is available under CC-BY-SA unless otherwise noted.