The Elven Resistance was a resistance movement formed by queen Fay and the last surviving Everlightian Elves as a great alliance of many Light Magic creatures to oppose the ruthless advance of the Glorious Empire and its genocidal campaign against all of them. The Resistance fought hard for its independence and survival during the terrible War of the Glorious Empire, but in the end, it was defeated by its enemies and its remains were assimilated into the Fourth Overlord's evil empire.

The Elven Resistance uses two distinct symbols to mark their assets and territories: the first one is a stylized tree whose canopy is shaped like a rainbow, while the second is the classic peace symbol painted with white paint on a large green leaf.

Although the Resistance is a multi-species organization, it is entirely dominated by the culture of the Everlightian elves, the most powerful members of the group. They promote a community lifestyle in contact with nature, where everything is derived from the fruits of mother nature, such as clothing, food, buildings and weapons, and then equally shared among all members of society. They are strenuous advocates of pacifism and free love, but are always ready to follow the path of war if every other alternative is ineffective. They fight to defend all the creatures that are too weak, innocent and peaceful to defend themselves from the violence of the Glorious Empire, such as the gnomes and seals. They show great empathy for all living creatures and experience strong emotional pain when they see them die by the hand of cruel people.

Another important thing to say about the Elven Resistance and its culture is about its precious queen, Fay: She is the center of an extensive cult of personality and is identified by the members of the organization as the living avatar of the Mother Goddess. Indeed, she is a fairy out of the ordinary, characterized by a much more humanoid appearance than the other fairies and able to concentrate within herself an absurdly large amount of magic energy, yet her warrior prowess and leadership skills tend to be depicted by her followers in an extremely exaggerated and unrealistic way. The presence of the queen is felt everywhere in the organization. She is worshipped alongside the Mother Goddess and her statues dominate public places.

The Elven Resistance is structured as an absolute monarchy with theocratic connotations, since the monarch, Queen Fay, is worshiped by her people as a divine being always concerned with the good of others and to act unselfishly. However, due to the lack of strict rules typical of full-fledged monarchies, many subjects feel entitled to take personal initiatives that go against the orders of the queen in case they believe that her judgment is compromised.

The Elven Resistance is divided into numerous independent cells scattered across all the frontier regions of the Glorious Empire, where the influence of the enemy is less strong, and also in several secret locations placed outside the empire's influence sphere (such as the Wasteland).

There are two types of cells: the Communes and the Sanctuaries.

In addition to the Communes and the Sanctuaries, the Resistance also has several camps scattered in certain areas associated with the past history of the member races of the organization, like the island of Everlight and its reef.

The members of the Elven Resistance are almost universally elves. Though there is nothing forbidding a non-elf from joining, it’s assumed that only the elves and Light Magic creatures are interested in pursuing the goals that the Resistance seeks to achieve. Humans, especially those coming from lands subdued by the Glorious Empire, are considered useful spies and auxiliaries for the Resistance and for this reason they are often secretly recruited by the Communes. Dark Magic creatures, such as the minions, are unwelcome, not only for their long history of enmity with the elves, but also for their excessive destructive tendencies and their total disregard for life. It's known that there are no Dwarves or Halflings among the Resistance's ranks.

The typical member of the Resistance, then, is a strong Elf warrior, usually from the disgraced island of Everlight. Physical fitness is a must, both for the hard work they endure to move the Light Magic Creatures under their protection from one shelter to another, and the many battles they must fight against the mighty armies of the Empire.

The Elven Resistance's existence is one of ceaseless battle, fought with a courage and steadiness that only they possess. Every aspect and resource of the organization is dedicated to their war against the greatest enemy of their time, the Glorious Empire. But it is a war that, little by little, is being lost. The Elves fade, whilst their enemies multiply, and each death is a loss that the elven race can ill afford. Yet it is not in the Elves' nature to pass peacefully from history. When the Queen of the Elves, Fay, issues the call to war, her people gladly answer.

Unlike the Glorious Empire, the Elven Resistance can't rely on large armies of professional soldiers to fight their battles, which is why their armed forces mainly use guerrilla tactics to counter the enemy, including ambushes, sabotage, raids and hit-and-run attacks. An advantage they have on their enemies is greater mobility, mainly thanks to their extraordinary longships, which allows them to fight a larger and less-mobile traditional army.

The Elven Resistance had a rather powerful army, made of several types of troops:

Florian Greenheart and his subordinates.

Elven warriors who are about to attack a minion.

Concept art for the Elf females

A concept, showing front view and back view and the design of the elven priestess. 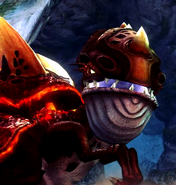 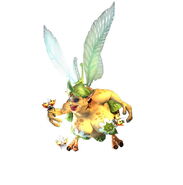 A Fairy
Русский
Community content is available under CC-BY-SA unless otherwise noted.
Advertisement