During the events of Overlord, the dwarves waged war upon the elves, that is until Oberon was surrounded by his tree preventing more dwarves from entering the Evernight Forest, causing the dwarves in the Forest to be cut off from the Golden Hills. Before the blockade, however, many fleeing elves were enslaved. When the Overlord entered the dwarven lands, the Golden Hills, they attacked on sight, most probably because the minions and the Overlord were their former enemies.

Dwarves are a plump, intelligent, short humanoids, who inhabit the Golden Hills. Whilst being wealthy and tech-advanced, they are a race of hardy workers and skillful warriors. The dwarves hid their Beer Kettle deep underground. When the Overlord took it, they were dealt a great blow, which may even have impacted the events in Overlord II.

In Raising Hell, demented Dwarves appear in the Golden Abyss. These dwarves appear to have been driven insane by their lust for gold, due to them following around the large gold-bags in the area. However, they apparently hate Goldo more than they love gold, as they willingly attack and destroy the Goldo statue to reveal the Abyss Stone inside him. This is likely a joke however, as the statue is also made of solid gold.

In Overlord, Dwarves with various roles and professions are encountered. 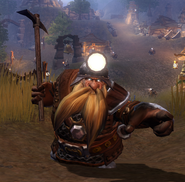 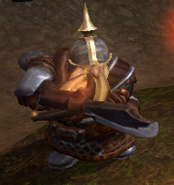 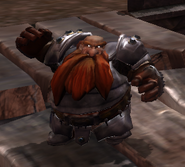 The dwarves did not appear in Overlord II. It can be assumed that they were not considered magical, so the Glorious Empire ignored them. They may well still be recovering from the loss of their Beer Kettle, though, or they could have fled deeper in the mountain after the Great Cataclysm contaminated the Tower Lands and consequently the Golden Hills. They could also have perished from the Magical Plague striking them the final blow after the Third Overlord slaughtered them in the brewery.

The Dwarves are ruled by their leader, Foreman Widget. During this time period the dwarves had not yet had a bloody war with the elves, both races tending to keep to themselves. Their long feud was ignited when the First Overlord disguised his minions as elves and attacked the dwarven homes. The dwarven leader Widget attacked the Overlord with his motorized robotic suit, believing it to be the elves attacking. Widget was killed in the ensuing battle and the Overlord left, but not before leaving an elven crown behind. When the Overlord's sister Gerda rushed into the room to warn Widget about the elves (really the Overlord), attacking, she saw her dwarven lover cold and unmoving. She then noticed the elven crown, and waged a merciless war against the elves, to avenge his death.

It is quite possible that the First Overlord started off the long war between the elves and the dwarves and that it continued to the events of the arrival of the Third Overlord. This would explain why the elves were taken and why the war had occurred in the first place. However, there is not a lot of evidence to support this.

Dwarves have apparently not disappeared, having reappeared in the World after the fall of the Fourth Overlord. They are not necessarily affiliated with the Forces of Good, as evidenced by the fact that there is an army of evil Dwarf mercenaries called the Utter Bastards. These warriors were led by Hakon before his death and, though considered "evil", they agreed to work for the Shining Justice in exchange for good pay.

Dwarves are short, bearded and muscular humanoids, only about a third of a normal human's height, but far broader. Some Dwarves, such as professional Warriors, are more than half as tall as a human. They usually wear large, thick armour designed for either mining or combat.

"The Dwarves only build their houses underground to stop rain getting in their beer!"

Among all the races in Overlord, the Dwarves are undoubtedly the most technologically advanced, giving them a vast amount of weapons such as flamethrowers, bombs and even tanks, making their army extremely powerful and difficult to fight. They don't seem to be very skilled at neutralizing magical threats though, since Oberon Greenhaze (accidentally) managed to chase them away from Evernight Forest by unleashing his nightmares into reality. Several Dwarven corpses can be found in Evernight.

Another example of their mechanical skills would be a pipe-system which they used to deliver beer, something they treasure dearly, directly to their underground-homes.

Like Halflings, there appears to be no evidence of female dwarves across their lands which leads to the possibility that they are a sex-neutral or asexual race, or alternatively steal local inhabits of the lands to breed with.

It was stated by Gnarl that liking gold is a trait shared by all dwarves. However, their king, Goldo Golderson, took it to such a level that even the other dwarves started to hate him. This fact was shown in the Overlord: Raising Hell-expansion pack, when the dwarves tried to kill Goldo in theGolden Abyss.

Two Dwarves-Dwarf Miner and Dwarf with a flamethrower. 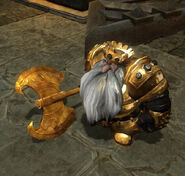 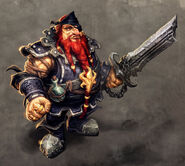