Unlike the rest of the Netherghūls, Cryos comes from an extremely privileged background as the youngest prince in a line of dark elves. Unfortunately he is also the last of his line and heir to a throne that no longer exists after the rest of his family were wiped out during the Shining Justice crusades.

Cryos’ family lived in the great ice caves of Nordberg and carved the ice and snow around them in into a shimmering fortress. Cryos himself used to use his powers over ice to freeze creatures together, creating great monstrosities which protected his family’s domain.

Unsurprisingly, their home was a prime target for the Shining Justice Paladins. But their ice stronghold was so impenetrable that the paladins had to recruit mercenaries to take them down. They chose to hire Hakon and The Utter Bastards for the task. They might be ‘technically’ evil, but like most dwarves the lure of sackfuls of gold outweighs who’s behind filling them.

During the battle Cryos’ family were wiped out and Cryos himself dies fighting Hakon, both executing killing blows on the other at the same time. This allowed the Minions to gather up two dark heroes at once. However, whether they’ll be able to put the circumstances of their demises behind them and become dark allies in the battle ahead remains to be seen. Gnarl hopes that their past fracas will only aid their determination to prove themselves during the Trials of Evil (™).

One page about Cryos from the Overlord FoE art book. 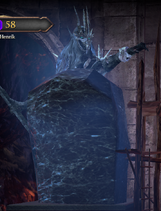 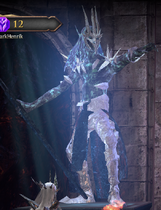 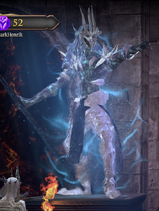