"This is my town. And I am not at home to demons!" — Governor Borius as the Overlord invades Nordberg.

Governor Borius is the brother of Marius and was the Imperial governor of Nordberg.

Borius conquered Nordberg when the Fourth Overlord was a child. He and a Centurion led a large force of Imperial Troops to the town gates and demanded that Nordberg hand over any of its magic users. Borius is convinced The Emperor purposely made him governor of Nordberg because he liked him better than his brother, Marius. He also believes that Marius knew the emperor favoured him and he so persuaded Solarius to send Borius to Nordberg.

The governor is seen several times in and around Nordberg Town. He is seen in the Nordberg Sanctuary when his soldiers recover a spell stone and impatiently awaits a hot bath and a bowl of quail's eyeballs. Borius is found again commanding the Ballista and later when he discovers that the "Witch-boy" is back in Nordberg.

The Overlord later blows the gates of the town down and finds Borius, who runs away to the town hall. He is seen arguing with his brother in front of the town hall of Nordberg and it is here that he is squashed by his own statue thanks to the Overlord and his Minions, who push it onto the pompous governor. The Overlord later can either enslave the tub of lard or kill him. When he is enslaved (unlike the other enslaved people), he does not do anything: he just lies on the ground (implying that he has become physically immobile).

Later, when the Overlord is thrown into the Arena, Marius will comment on either the Overlord killing or enslaving Borius depending on the players actions.

Borius is an ambitious, greedy and ruthless man, who cares little for Nordberg, seeing it as a backwater hovel. He is very overweight (unlike his brother Marius, who is slim) and is one of many characters who call the Overlord "Witch-Boy". He is also very fond of bathing and gorges on strange meals, such as a quail's eyeballs and stuffed widgeon, to which the Nordberg citizens are astonished, as they do not know what a widgeon is. He also wears an assortment of rare and valuable decorations, like a ruby-encrusted collar, a ruby-encrusted belt, ruby-encrusted bracelets and even a ruby-made wine bottle. He wears also a leather, pristine-white mantle. Also, there is a rumour in Everlight Town, that Governor Borius was eaten by the local savages. 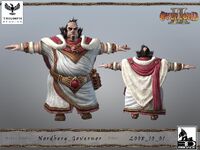 CG Model for the greedy governor of Nordberg

One of Borius' ice statues in Nordberg.

Borius before the battle for Nordberg.

Borius squashed by his own statue.

The two possible fates of Borius.

Borius and his brother Marius.

Behind the scenes[edit | edit source]

Retrieved from "https://overlord.fandom.com/wiki/Borius?oldid=19412"
Community content is available under CC-BY-SA unless otherwise noted.