Blaster Bugs are giant beetle-like insects that are native to the Ruborian Desert and they are considered to be less dangerous than most creatures in the Ruborian Desert. The breeding grounds and nest of these insects can be found all over the desert and can be found on the rocky hills spread out through the desert. Blaster Bugs are mostly nocturnal creatures that come out at night to feed.

Blaster Bugs are omnivorous scavengers that usually coming out at night to eat the hardy desert vegetation and dead animals they find. They are also ambush predators that only hunt smaller animals like lizards, desert rats and smaller insects. They dig themselves into the sand watching until prey comes within striking range. Another reason why Blaster Bugs dig themselves into the sand is to protection against the sun. The extreme heat makes the already unstable biochemistry of the Blaster Bugs more unstable. Blaster Bugs will never hunt or attack anything bigger than themselves. They always try to avoid all confrontation with bigger animals, and many predators in the Ruborian Desert have learned to avoid the Blaster Bugs at all costs, because they all know that will happen if one dies.

If a Blaster Bug dies, the somewhat unstable biochemistry of the Blaster Bug becomes extremely volatile and in less than a minute or thirty seconds, and it shortly explodes in a shower of bug gore. Poking Blaster Bugs with something hot or setting on fire has the same “explosive” result. However, don’t worry, Blaster Bug not attack you if do not come too close to them, threaten them or attack them. They are very protective of their eggs and infants. If someone steals one of their eggs or larva from their nest, they will pursue the thief until he releases the infant or the infant dies. The explosion of a Blaster Bug is capable of doing great harm to a Sandworm and a secondary explosion is enough to kill it. There are also rumors that Blaster Bugs explode when agitated, disturbed, angry or bored. There is a chance for them to drop their face when dying. 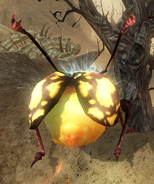 Blaster Bug nest.
Add a photo to this gallery
Retrieved from "https://overlord.fandom.com/wiki/Blaster_Bug?oldid=18164"
Community content is available under CC-BY-SA unless otherwise noted.