"Welcome to the Battle Rock, minions! It's certaintly a wonderful day for a bit of mindless slaughter! Now, let's get thoset ears waggling... and those claws clattering... for the Ooooovvvvvvvveeeerlord!" — Quaver

Battle Rock Nemesis is available as new a downloadable content pack (DLC) for Xbox 360 and PlayStation 3, expanding Overlord II with a new arena for the Netherworld Tower. It includes new bosses, audiences and challenges which come in three rounds. Also you can win Spell Catalysts. The challenges are:

The Hunters are Eskimo-like people, who originate from Nordberg. The challenges consist of normal hunters and spear hunters.

This part only includes a few hunters and spear-men. Attack them with your minions.

The second round brings a few more hunters into the battlefield.

The harvest round brings a lot more hunters into battle. Try to take out the spear-men first, then focus on the hunters.

The Gnomes are a small race that steal things. The challenge consists of normal gnomes and the fire gnomes.

The Satyr is a demon summoned by Elven Priestesses. He is a boss and plays panpipes to summon various magical creatures such as unicorns, gnomes, fairies and flytraps.

The first round of the satyr is fairly easy, as he only summons fairies and flytraps, and you only have to take a quarter of his health off.

In the second round, it is pretty much the same, except you must bring him to half health.

In the third round, the satyr will summon unicorns and fire gnomes as well as fairies and flytraps, but if you keep close to him when he plays music, he will jump to another platform. Before he starts playing again, try and kill some of the creatures he has summoned and kill him off by sending minions.

The Empire General is a boss, who has came to the Netherworld looking for Juno, since he loves her. He is identical to a gargantuan except for the armour. He summons Empire troops and archers to help him in the battle.

The Empire General - Round 1[]

Notice the general is on a tower surrounded by a blockade. Kill both troops and get the ballistas up. One ballista shoots explosives, and you must use this one to take out the barricade, and the other shoots bolts, which are good for killing soldiers surrounding the explosive ballista. Then, go up and attack him a bit, dodge his attacks, knock him over and attack him again, and he will run away, ending the round.

The Empire General - Round 2[]

The general is still on the tower, and you must do the repeat the previous battle, except attack him for longer.

The Empire General - Round 3[]

In this round, archers will fire at you from towers, so when you get to the ballista, take them out with either ballista, and then get the barricade down with the explosive one. Do not yet leave the ballista, since more Empire troops with crossbows will emerge from one tower. Use the ballista to take them out, and then fight the general. At half-health, he will jump down and summon his troops to attack you. Leave your minions to fend them off, and shoot him with the explosive ballista. While he is down, attack him and then repeat. Be careful to avoid his charging. Eventually you will kill him.

The Phoenix is a flaming bird that apparently burned through rock to get to the Netherworld.

The phoenix is pretty simple. Hit him once when he is on the floor running after you, and move out the way. He will cast a shockwave and land on the perch in the middle. Use Greens to attack his back, not his front. He will then try to fly and fall to the ground. Attack him. Repeat this till he is dead.

In this round the phoenix has a new attack. You must hit him once every time he is on the ground, and move out the way. Instead of directing your Greens, just move as far as you can to the centre of the battlefield, since he will fly around breathing fire. He will now land on the perch, so send your Greens to attack him again, send all your minions to attack him and do so yourself as well.

The phoenix now has yet another new move. Hit him once every time he is on the ground, move out the way, and he will fly around dropping eggs that are full of fire gnomes. Sweep your minions on them to kill them and get any health you need by using the minion spell that kills a minion and gives you health, then he will land on the perch. Send your Greens, and attack him with all your minions yet again, and attack him yourself. The gnomes are the difficult part of this battle, so get rid of them as quick as possible. When they take a lot of health from you, use the Minion spell to get more health by sacrificing a minion. Repeat all this, and he will be defeated. 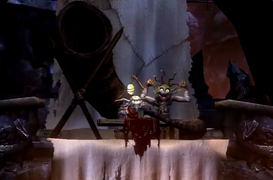 it appears that the arena was supposed to be part of the main game, proof is the file of the arena itself left within the map files of the game.character files and with fully voiced dialogue referring to the Arena

this is the lines that there were supposed to be spoken by Giblet when the Overlord visited the Foundations for the first time.

The Satyr and the Phoenix creatures files are still in the game files, in the 'Resources' folder.

The gnomes in the battle rock is a great way to gain lifeforce, since it's filled with gnomes who have brown, blue, red and green lifeforce. It also makes it easier to forge weaponary.